Run From The Sun is a journey through our Solar System.

You may note that this is branded as a Destructor Creator Destructor (DCD) record instead of fully under my name. Run From The Sun is a different record from my usual and as such has been both a challenge and a joy to write.

This is the second time DCD has appeared on a release. The first being 25 years ago on the Penance EP (didn’t plan that timing). For the last few years, I have been flirting with the idea of guitars & Heavy Metal forms in my music. If you look back you will find tracks that borrow from Metal. The Muses of Metal called but it took me this long to answer fully.

As usual, you can purchase through Bandcamp with the “buy” button just under the cover above. You can also stream on Spotify buy on CD Baby or Google Play Store. (hint you probably want to buy at Bandcamp or CD Baby)

Everyone says you need guitars to make Metal. Wikipedia says “Heavy metal is traditionally characterized by loud distorted guitars…” It meant that I thought I would need a guitarist/writing partner so I advertised and asked around. Nothing happened past a few people replying then going silent as soon as they realized what I was really about. I wrote a few riffs and progressions that I could work on when the person showed.

But they never did so I moved on.

There is more to Metal than Marshall Stacks at 11. There is a spirit that defines Metal. I always wanted to work from the spirit of older (or Classic) Metal instead of the cliches. 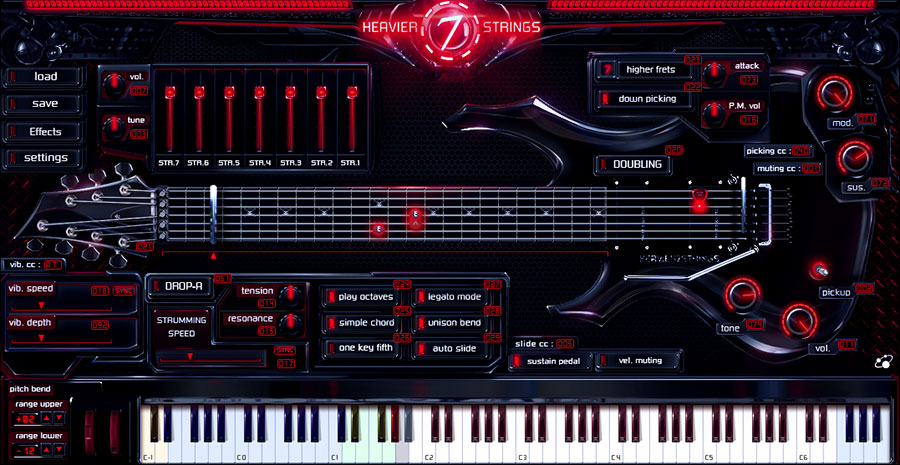 I looked at guitar synths, which are generally samples of guitars with inbuilt scripts that try to fool us that we hear a guitarist. Some are pretty good and have super-impressive demos. But at the end of the day (when it’s night) they either need you to know how to play guitar well already (purpose defeated) or just sound cardboardy. They don’t flow. Spirit always flows.

I am a synthesist. I create new sounds and new visions. I needed to make my own vision of Metal. At first, I grabbed Jane’s Strat clone and sampled a few articulations (based on what I had gleaned from reading & virtual guitars) and turned them into my own virtual instrument. The samples got used for a track (Earth) and I liked the results but being me I need to keep re-drawing my instruments so it was only a piece or two before I was fully using synths instead. 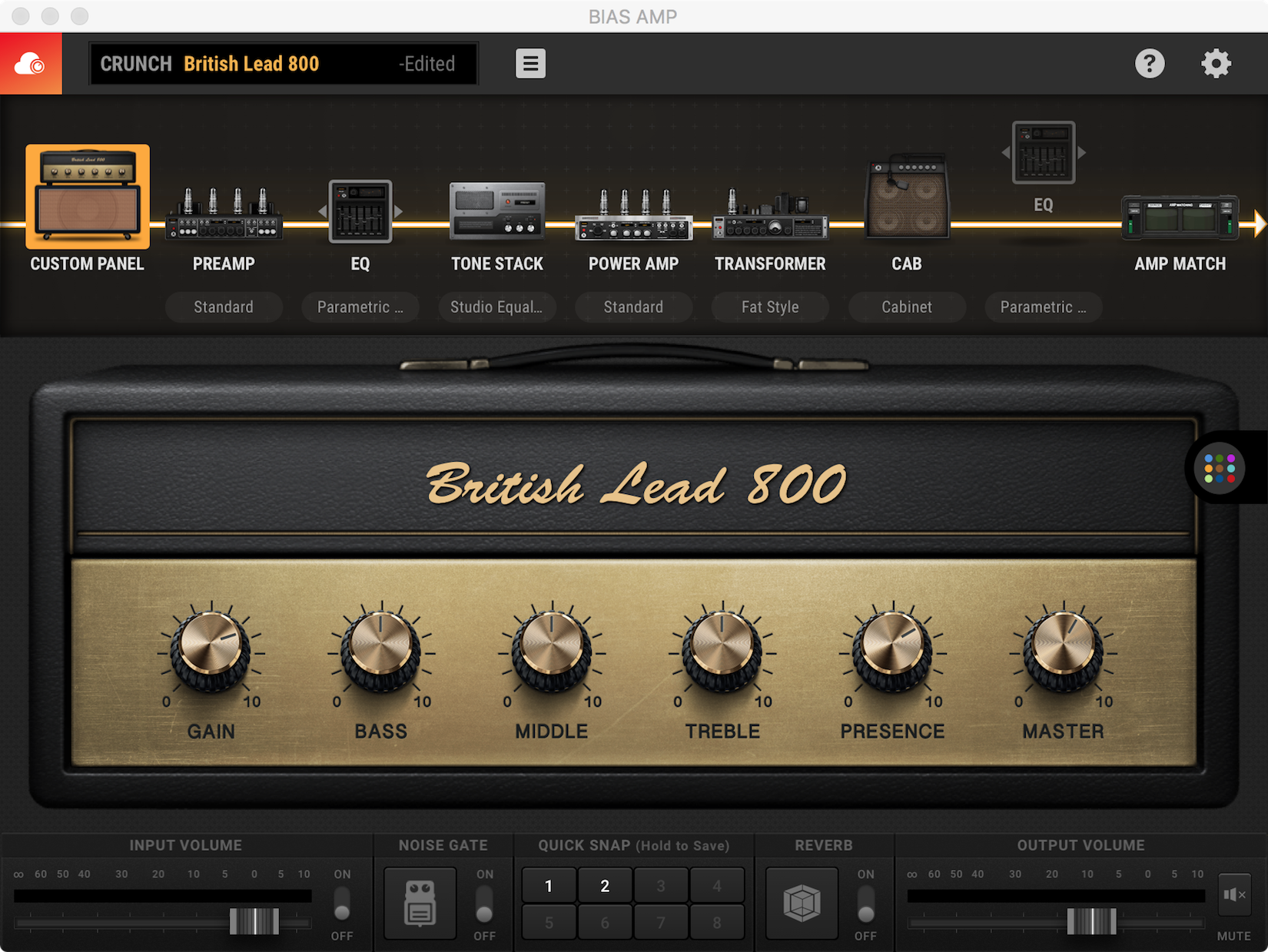 Guitarists are super-pedantic about their tone and effects chains. I guess I kinda am too but I have learned to work with what I have instead of obsessing over some perceived utopia. At first, I used the Amp Simulators I had as it seemed like what I was supposed to do. Sounded pretty good.

I wanted something more – to really understand the component parts of the sound. I recalled that on Azazel The Watcher I had been a lot happier with the “guitar” sound I got from layering a couple of synth distortion effects.

I used what I could hear the official Sims doing and swapped to the effects I already had and knew to make my own versions. I think that what I ended up with was a lot heavier & meaner as it was more “real” than being stuck in trying to play catch up. This is DCD and not Iron Maiden, Judas Priest, Cathedral, Opeth…

Here is a screenshot of the Rythm Guitar you hear on the right-hand speaker in Neptune. I made a palm-muted power chord in a synth (Thor) and sampled it off to load in Grain; which is then subjected to two layers of distortion and the mysterious Scream “Body” section which is, in reality, a resonator that doesn’t do a bad job of adding the nasal guitar cabinet thing. Sometimes I used the cabinet sims in Waves GTR3 or Positive Grid’s Bias but it was my choice which left me much freer to explore new textures. 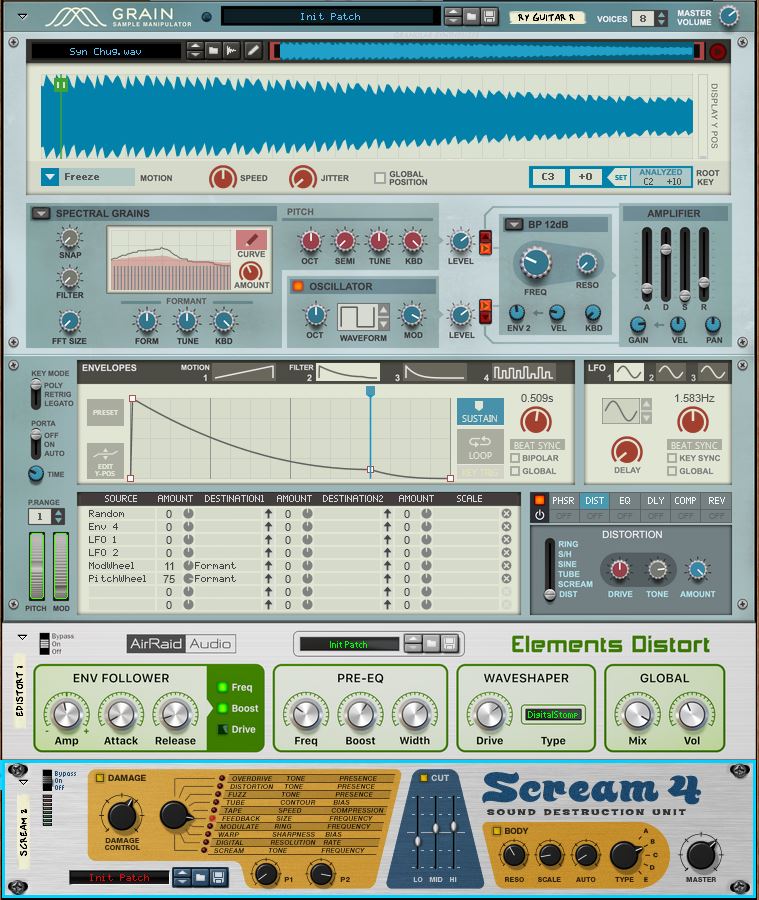 Drums are another integral part of the modern Metal sound with a strong pressure towards double-kick drums and Blast Beats. This is a way in which in the last few years Metal has become very close to electronic music in that it is very common for the drums you hear on a record to be very processed and heavily edited to move every hit into perfect time.

It makes many drummers sound more like drum machines as the human flow or groove is lost. Great as an effect like in AC/DC’s “Thunderstruck” & “Who Made Who” or ZZ Top’s “Afterburner” album but a problem when the whole performance becomes too mechanical. I’m glad to hear some Metal is slowing and a few drummers are refusing to allow that treatment.

I decided straight up that I wouldn’t even really try to do anything but make drums as I normally do. Sure the different sonic profile of a Metal record does require a different, brighter overall, drum tone but I wasn’t going to try to use preset drum patterns or anything that pretended to be a real drummer. I didn’t even use acoustic samples.

What you hear are pure synths with the exception of the fast section in Luna which is a TR-909 sample set. I decided to make the pretty part very electronic so it was a perverse pleasure to abuse the 909 (famous in House & EDM in general) into a Metal kit. 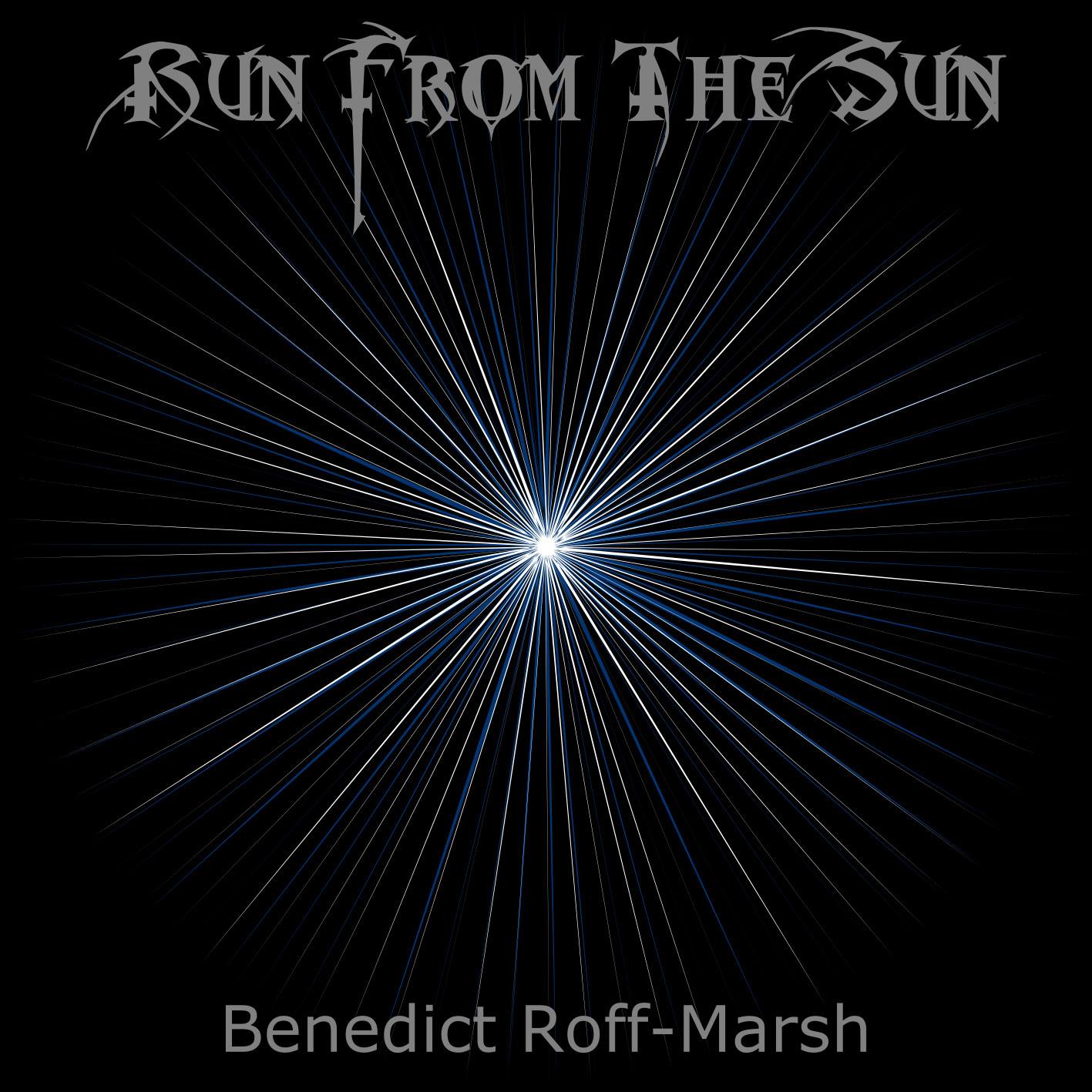 For Those About To Rock

I know there will be some Genre-Nazis out there who will go off their rockers over how to describe this record – assuming they don’t try to shun it entirely. Here’s my take.

This is Metal. This is Progressive Rock (Prog for short). This is pure Electronic Music (note the lack of a D). Now to the Sub-Genres: you will find elements of Doom, Classic Metal, perhaps even Power Metal & Symphonic Metal (altho that is in your mind as I find those styles rather hollow), Stoner Rock (remember this is Prog), Electro or even Synth Wave (but that is probably because to kids that is the only music ever made unashamedly with synths :rolls eyes:).

Bottom line, where would I want a record shop to file Run From The Sun? Heavy Metal, Progressive or Doom if they are that specific. Progressive Rock if they have such a section would be fine too. I will also take Space Metal if I really need a sub-genre.

Here’s one of many conversations I had with Jane early in the writing as I worried about what I was doing. Thankfully Jane is pretty unflappable.

B: Interesting work, making Metal guitars out of synths.

J: I can imagine! From what I’ve heard, you’re pretty good at it

B: The thing is once you get past that they don’t sound right you can start to make a thing that plays that role only is not.

J: Yes, I understand that. It’s about embracing what the sound is, not what it isn’t.

B: Yes. And Impressionism, Surrealism (or whatever that is called in painting)

J: Yes. It’s not meant to be a photo-realistic image, rather an imagining of the subject that captures a specific attribute of interest.

B: Yes, I am creating something that is parallel to Metal & Prog Rock but actually isn’t. But of course is Prog & Metal, as those styles are a spirit and not just playing at certain tempos with certain instruments.

J: That is it exactly. It’s like saying it’s not “real” because you’re using a black guitar instead of a red one. There is always variation.

B: Yes. I am exploring an edge. A bit of a far-out edge but still firmly in the spirit of the genre

UPDATE: two months after release and “Run” has become one of the most disappointing releases I have ever made. Not only no sales (but that I am getting used to in this lovely “modern” world we have created for ourselves) but effectively no comments either. It feels like internet ‘friends’ edge around the room to escape lest they have to say anything.

In the end the best I managed was that several people told me it wasn’t Metal in ways that made it cear they wanted no more conversation on the matter. Or there was Dungeon Synth tool who said it couldn’t be in their group becasue it didn’t sound Medieval (um synths in 1320…! not to mention that the fact that most of my record is actually very close to the medieval monophonic – all instruments play same note – style). Anyways.

Maybe my record is simply too terrible to comprehend or maybe that part of the society has changed too and no one wants to engage in anything remotely challenging. That is a scary place for me to be after growing up in the New Wave era where challenge was a the core of a lot of our art. Listening to Killing Joke right now and that makes sense to me, far more so than Opeth or Adele that challenge me only in how long I last before I hit the eject button. Penance got interest 25 years ago but now when I did it better…
Oh well, one lives and learns.