This article will cover a few things but the concept of criticism will be common. It is me working out how & why on some things. As such it may be of no interest to you. Or it may be of great interest as either thinking material or to understand my brain a wee bit better. I’m not silly tho so I assume you’re gone already.

After being punted from a family business where I had worked for over two years I am trying to work out why. Why it got to this? Why one family member cascaded into three family members? Why cutting me off seemed like a necessary thing?

I’m not here to open family matters to public scrutiny. I’m no Kardashian. But the fact that this was family is more powerful than “just a boss” or “some guy” I knew online as has happened before.

Yes, there is a pattern and I’m not immune to seeing that at all. Patterns are a specialty of mine. One family member tried to put this on me, even went so far as to say that I had a habit of beating on my women! And my own Mother!!* Not useful, not productive, not conducive to useful outcomes. Yes, this is part of the pattern: when it comes to the point of fracture, people say and do terrible things to me. I always wonder why, especially if I have offered easier paths that could have been taken rather than such dramatic events having to be escalated to “deal with me”.

It seems to me that the thing in common here is that criticism or more to the point perceived criticism or misconstrued well-meant advice was probably the cause of all these outcomes.

I am now going to turn over the Aspie card. I don’t like playing it but in some situations, it is part of the reality of the situation. I know that many people don’t really want to accept (let alone adjust to this) reality that I am not them but it doesn’t change facts. I process differently in some situations. It makes me as different from them as they are from me. I do all I can to adjust, do they?

Let me explain why I decided to “floop the pig” so early. As an Aspie, I analyze situations, look for the patterns and how they can be worked most efficiently. I then feed back advice on how that can be improved. I say that out loud to be helpful. Being helpful is good. Not being helpful is mean, isn’t it?

Being helpful is evil. Yes even if the person directly said they wanted help to improve their thing. They didn’t mean that. They meant I want you to make me feel good about myself as I make a mess of this again and again. Of course, saying that would make them sound really silly so they ask people for help.

Stupid people like me think this is an opportunity to be of service, raise my value as a comrade or employee. I can’t help it. It is as wired into me as a cat’s meow. I can try not to do it but I will again. Would you punish your cat for having a meow? I assume you think such a Q absurd. Yet taking a person wrongly is a thing we do not only with alarming regularity but with alarming obstinacy. Cat non-meow forcing.

You may be thinking that I am merely trying to “snowflake” to wriggle out from under a lifetime of “bad manners”. Your call. I will say this: there are people I know who actually value me for my ways. They actually use my ways like they are assets. This suggests that not only is beauty in the eye of the beerholder but people can adjust to other people. This helps me accept that some girls will, some girls won’t. So it ain’t all me.

Mirror Mirror On The Internet

Post Modernism brought some new thinking: nothing is anything, everything that is expressed is good, if someone feels a thing then it is the totality. All that guff.

Essentially this means that if anyone criticises this fellow (in the video) for not being every bit as good as Freddie Mercury then they are a bad person (from 1:10).

Fact is that Freddie was not even this horrifyingly incompetent and self-blind in his worst nightmare.

Now I bet if you have read this far you are probably saying that you’d never miss that one. Now what if I asked you who was better: Kylie Minogue or Pink Floyd?

Would you say that they are both as good as each other? You can’t judge them? The genres aren’t the same so they are equally talented?

Here’s the spade. Pink Floyd is brilliant. Kylie is cute in pink but no Pink Floyd. Her level of artistic merit is NOT THE SAME.

Kylie fans reading this would probably be mortally offended. How dare I criticize? Who am I to have an opinion? Call out the Dogs of War (oops they are a Floyd song so better call on the Chiggy Wiggys instead lol).

The internet has become the perfect place in which to enforce that we should only ever get positive, happiness affirming feedback, especially when you ask if your bum looks bigger than Nicki Minage’s.

Anyone who even alludes to the existence of anything resembling an elephant is immediately labeled as a person requiring re-education. Worked for Pol Pot & Stalin so why not for everyone else.

Look at the outrageous stupidity surrounding Serena Williams’s deplorable dummy spit (equally deplorable for Mcenroe and those regrettable Aussies). Not only that people tried to justify her behavior away but that when someone made a cartoon that pointed to the larger social situation, the cartoonist (whose job it is to make social comment in satirical ways – look at the speech bubble) was accused of all but raping the Pope’s pet deer. 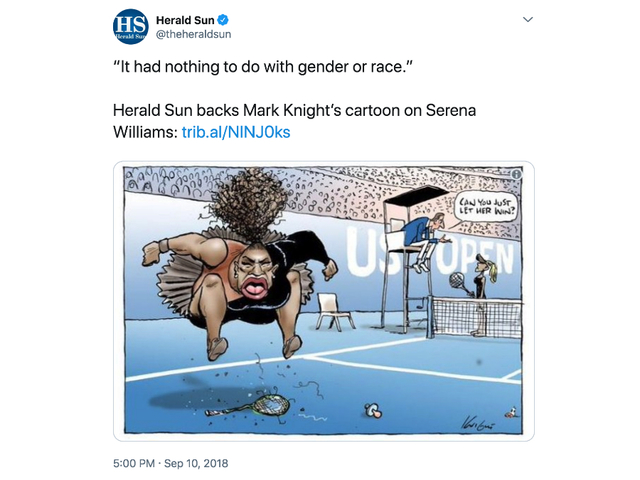 Thankfully in this instance, Mark Knight has a large enough force in his corner to soften that blow and hopefully save him from execution. But many don’t.

Essentially the real rule being played is: every opinion is equally valid, so long as it isn’t pro-Trump – that is, the opinion isn’t flattering to the beerholder’s sense of ego. The beerholder gets to decide, not based on your intent or even what you actually did, but on how they feel they feel. That is enough. Then you are fair game and any & all vile behavior is valid. Since when did that become ok?

My Facebook just went ping and I found an Op-Ed written for The Kansas City Star by none other than Gary Numan, the Aspie Musician. His article parallels mine.

Right next to the article I see this horror of a woman not only trying to kill her children but plotting from her jail cell to have her husband rubbed out too. Easy for you to dismiss this as “just a crazy person” but where did she get the idea that erasing people who didn’t suit her was ok? What was so wrong with simply saying, sorry hubby, this isn’t my thing, I’m outa here; my support checks will be in the mail nice and regular as I find myself in the Nevada desert?

On a hot summer night, Would you offer your throat to the wolf with the red roses?

So the 42 cent question right now is what to do? Many people have simply put their heads down, can’t beat em so join em. I understand.

But do I want to be that kind of person? No, I don’t, and what’s more, as I said above I can’t. It is hardwired into me to be helpful. Even if I try to temper that, I will still offer help when someone asks lest it hurt me to turn away. Fully knowing that some people will turn on me and try to rip out my throat.

My solution then has to be more careful who I hang with. I have already done quite a lot of this as I dramatically cut back forum usage where people were free with their attacks. I have also been a lot more likely to show my own teeth when people start to use me as their whipping boy.

I knew there was something fishy in the family/business before. But I tried to believe it was ok. I tried to pretend that maybe the behaviors I saw were my mistake, my Aspie paranoia. No, they were smoke coming from fire.

To borrow from Neil Young’s “Powderfinger”:

“Red means run, son, numbers add up to nothing.”

*just in case you think there may be anything at all to this I have only ever hit two females, both in school and only after they hit me first – after a period of on-going bullying. Fair is fair then. Live by the sword and all that. The “justification” here is that if someone insists on winding me up far enough I will shake and clench my fists.  I won’t do anything past that (and trying to argue my corner using logic in words). To construe that into violence is as silly as me saying that I was murdered by Jar Jar Binks yesterday.

UPDATE: I thought I would add this here. This conversation happened in a Private Message space about a week after publishing and honestly just floored me. 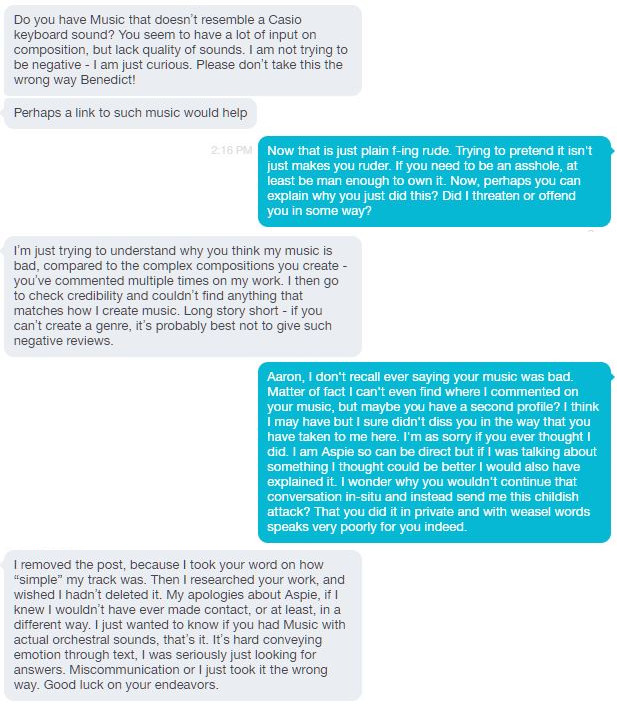 As you see I didn’t exactly rip him the new one he deserved with that opening. But at the same time, I wasn’t letting this slide. Why should I feel that I deserve to take that sort of thing?

Ultimately he acknowledges (in a circular way) that it was really about him. His reaction to my playing the Aspie card is interesting: so he’d not talk to me if he realized I was not “normal”. Well done Sir, well done. I sure feel validated as a person after that!

The background was this fellow posted a track in a musician’s forum where Feedback is the whole idea. Even more, he was directly asking for feedback. I said I liked the sound he had and that his concerns in that area were not warranted.

I then went on to say that the thing he could develop was the melodic parts as honestly, his 3-4 minute piece was essentially the same loop over and over so while it sounded pretty good, the piece was letting itself down as a narrative or story. We swapped a few posts and that seemed to be it. Well, until he had that meltdown anyway.

Now when I go to that place, I feel afraid to make any comment that isn’t like “oh wow this is the best-darned tootin track I ever heard”.

3 thoughts on “Criticism and its Role in Alienation”